With the net daily demographic growth of 170 000 people, energy is an incontrovertible and an ever more precious resource every day. It is generally thought that over the next decades, the world will face a considerable increase in global energy demand. If Europe wants to be a significant collective player, economically competitive, if Europe wants to preserve the social and environmental quality of life of its population, it has to define its medium and long term strategies to preserve its energy security and to assure its energy independence. 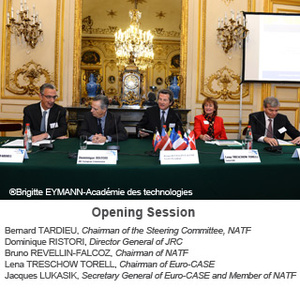 4. Session: From the citizen standpoint

Conclusion and proposal for a Euro-CASE declaration

Wednesday, November 14, press conference, France Amériques
Euro-CASE draws its conclusions and recommendations after its annual conference 2012 on the theme of "Independence energy for Europe".

The National Academy of Technologies of France - NATF - was created in 2000. It is today a Public Establishment since 2007 and counts more than 270 Fellows who represent a very large spectrum of knowledge and competences.
www.academie-technologies.fr / Contact : + 33 1 53 85 44 44